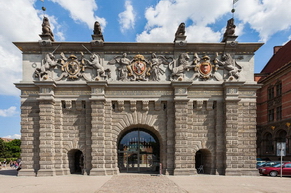 A builder and artist

In Gdansk you'll find traces of a Mennonite family of builders and artists, the Van den Blocke family. The Hansaic city of Danzig (Gdansk) was one of the richest and most beautiful cities in Northern Europe.

Willem was the son of the sculptor François van den Blocke, from Mechelen, Belgium. Together with his brother Egidius, Willem moved to Danzig, which was looking for skilled craftsmen to translate the city's pride into buildings. His most reputable commission was the Upper Gate, which was the start of the 'Royal Route' through the inner city. He decorated it in stone, with coats of arms of Poland, Prussia and the city itself. In Oliva he built the tomb of the Kos family. In Königsberg another one of his tombs can be found.

Willem's son Abraham, architect and sculptor, cooperated in building the Artus Court and Neptune's fountain, and built the marble tomb for the marquis Bonifacio in the Church of the Holy Trinity. He also designed the Golden House of Mayor Speimann and the Golden Gate. Willem's other son Isaac painted pictures in St. Catherine’s Church and in the City Hall, and painted images on the altar and the pulpit in St. Mary's Church. Together with their other brother Jacob, a carpenter, they also worked on the triumphal arch for King Sigismund.

Newcomers to Danzig, like Egidius' and Willem's sons Abraham, Jacob and David, gained citizenship by taking the citizen's oath. This might very well be the reason they became Luterhans, since Mennonites are forbidden from taking oaths.

Presumably Willem and his son Isaac remained Mennonites. A sign of this is that Willem named his three sons after the patriarchs. His 'Vermeulen-Bible' also points to this, because from a textual perspective it matches the Mennonite 'Biestkens-Bible'. The Danzig merchant Krijn Vermeulen had these Bibles printed for his Dutch speaking fellow-believers. On Willem's copy his name and the date 1607 are printed.

Isaac requested to be able to practice his trade without having to take an oath. His Anabaptism can also be found in his painted ceiling in the City Hall. God isn't portrayed in it, but merely indicated by an arm coming from heaven and the Tetragrammaton.