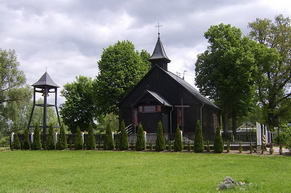 Mennonites who lived in Poland differed from their neighbours not only in their religion and ethnic origin, but also in the way they constructed their buildings.

In the areas of Poland where mennonites used to live there are hundreds of buildings of which the architecture is based on patterns brought over by 16th century Dutch Mennonites. Most of them are old wooden farm houses found in Żuławy (Werder) and in the low and central valley of the Vistula river. They are easily recognized: the dwelling and the barn are built in a long straight line, covered with one roof. They are very large, often exceeding 40 metres.

Mennonites living in marshy areas built their houses on man-made hills called terps. The foundation was constructed  from oak, the side walls were built with pine or or other soft woods. A wooden construction provided protection from the elements and made it possible to take the house apart again, and move it to a new site. The attic was used to keep hay and crops, but during high floods it would also become a shelter for the family and their property, including cattle.

In the first two centuries of the Mennonites’ existence in Poland their farm houses were also  used as houses of prayer.  In the 16th and 17th century there were only a few mennonite churches here. It was not until the 18th century that Mennonite communities began to obtain permission to build their churches in other places in Żuławy (Werder) and the  Vistula valley. These churches were made of wood,  long rectangles with a simple high roof which made them look more like barns or granaries than places of worship.

From the mid-19th century onwards old churches in Żuławy were replaced with new constructions which quite often followed the architecture of churches build by other confessions. Built with brick in a neo-gothic or eclectic style, but still easy to recognize because they had no tower. However, the tradition of building wooden churches was preserved longer in areas up the Vistula river near Toruń, Płock and Warsaw, where new churches were constructed by Mennonites in the late 19th century. Overall, in Poland Mennonites built more than 40 churches in 30 locations and used most of them until the great migration in the last months of WWII. Today there are only 9 former Mennonite churches preserved, some of which are used as houses of worship by communities of other confessions.