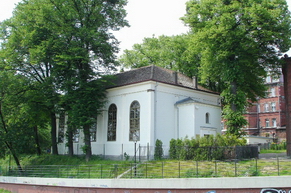 Mennonite wandering and settling in Prussia, Poland and Russia

When the Anabaptist-Mennonite movement arose in 16th century, its emphasis on adult baptism and  a theology of peace soon brought severe persecution.  A haven, however, was provided in Poland, where good farmers and skilled businesspersons were welcomed. And so a number of Mennonite communities arose, especially in the Vistula delta, a region that was remarkably tolerant in an age of religious intolerance. Here the Mennonites' skills in land drainage techniques greatly increased income from lands they quickly protected through a network of canals and dikes. Other Mennonites, skilled in business techniques, settled in the outskirts of Gdansk (Danzig) and in towns in the Vistula delta.

Not surprisingly, sometimes charges of heresy were brought against these nonconformists, and in one dramatic setting in Gdansk (Danzig), Mennonites were asked to disprove this assertion. In 1678, with the bishop of Wloclawek (Leslau) presiding, Mennonite leaders appeared before the bishop to be questioned on various theological issues. When the  hearings were over,  Georg Hansen, minister of the Gdansk Flemish church, noted that the churches had been freed from suspicion.  At the same time, some religious authorities let it be known that they opposed Mennonite settlement. But Poland remained remarkably tolerant.

New challenges arose when Prussia gained control of the Vistula delta. The new rulers had little sympathy for Mennonite peace beliefs, and pressure to have Mennonites serve in the army led to new challenges for the Mennonite community. Some leaders urged Mennonites in West Prussia to abandon their peace position.  Gradually, a division arose, and by the end of the 18th century, several hundred Mennonite families had moved to Russia, where Catherine II promised them freedom to practice their faith. Soon another large group of Mennonites emigrated to America.  But among those who remained in the expanding German state, more and more Mennonites abandoned their peace position.  Later, with the defeat of Germany in 1945, Mennonites joined in the effort to escape to West Germany and only very few found ways to remain in their historic home.