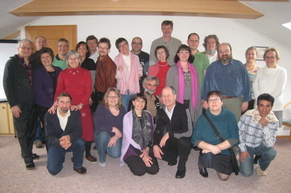 The admission of the Austrian Mennonites in August 2013

The Mennonites started their work in Austria in 1947. Missionaries from the Mennonite Central Committee and from the Mennonite Brethren Mission came to Austria to give aid the population regarding social issues. But after World War II the spiritual need was also huge. So the missionaries preached the gospel and people got saved. In 1953 the first Mennonite Church started in Linz. In the following years churches in Vienna, Wels, Salzburg and Steyr were founded and the Mennonite Conference was born.

Until the 1990s 98% of all Austrians were Roman Catholics and the Anabaptists were called a sect. Between 1960 and 1990 many different evangelical churches were founded. Some of them formed a conference, while others started the denomination of the evangelical churches. But all evangelical churches had the same problem: they didn’t get a status as church. Most churches officially existed as a religious association.

In 2011 the boards of the four denominations (Mennonites, Baptists, Pentecostal and Evangelicals) came together to discuss the situation and to think about a way to finally  the status of a church. One of the problems was that a denomination has to have 2 ‰ of the population (which is 16.500 people), and no denomination had that many members.

In this meeting a new idea was born: all four denominations together had more than 16.500 members. And so they worked on a constitution for the ‘Freikirchen in Österreich’ (Free-churches in Austria). In January 2013 they submitted the proposal for admission as a church to the government and in August they got the admission, so that the Baptists, the Pentecostals, the Evangelicals, the Mennonites and the ‘Elaia Christengemeinde’ who joined in 2012, are now seen as an official church in Austria.

This is quite unique, because it means that all Anabaptists are part of the same church!